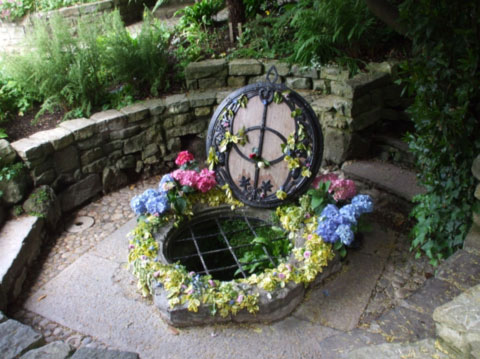 This weekend saw a large group of new and old faces descend upon Chalice Well gardens and house for a retreat weekend. The first major hurdle was trying to get all the copious amounts of food crammed into the two tiny fridges. Everyone arrived from all four corners and greeted each other warmly as old friends and got settled into their rooms, and enjoyed a tour of the gardens and some were even brave enough to step into the water of the well straight away, well it was a lovely hot sunny day, no better way to cool off.

It was decided due to the heat to move the TOR climb to the first night, so once everyone was settled, Pete did several taxi runs to get everyone to the top at the back of the tor, so that we could go up that way instead of the front, which was achieved after only minimal stops!!! The tor was full of all sorts of people and all sorts of dialects which shows its wide ranging appeal, as it was busy when we first arrived we sat around the side and looked out over the fields and got to know each other, and watched groups of four or more butterflies whizz past. We then went into the tower and sat on the stones with shoes off to feel the vibrations, some felt it more than others, but all enjoyed the experience and the view. Up there we got the first insight into Barry’s abilities, level of detail and forthright delivery style as he described what he had felt.

We then headed down to find that Gail had arrived and tea was served, a massive stockpot of vegetable curry, served up with rice and with Samosa’s and spring rolls provided by Anupa and Shetal. Despite all of that we then had bowls of fresh strawberries and whipped cream, courtesy of Maxine. It was then time to open the circle for the weekend. We headed out under the big yew trees and formed a circle and welcomed in our angels and spirits to work with and protect us for the weekend. We then went up through the garden stopping at the waterfall, all lit up with tea lights, and were taught to understand how different senses can help us pick up on messages, then it was then time to proceed to the top of the garden to the well head. Again all beautifully lit up with tea lights, we sat around the well and got comfortable for our first meditation.

The meditation brought forth messages for some and the first elements of healing for others. Lindsay had attracted a spirit to her that was so strong others could see the energy and also went over to feel it.

We all then headed back into the house for a strong cup of builders, and with Chrissy around many more were to follow over the course of the weekend! Most people were tired from the heat and the travelling so it was an early night (in retreat terms) for all.

Saturday morning came, and again bringing another sunny day (bit too hot), and people started to rise from as early as five thirty, and started to congregate out in the gardens or round the breakfast table.

Once everyone was dressed and fed, we all moved into the meeting room, where we opened our Chakras and then headed up to the blue room, a room where no one has spoken for two hundred years, before the heat became too much. Once back down we shared our experiences, again a mix of messages for self, others or just a timeout/healing session. Everyone then split into small groups and tarot cards were read, psychic pictures were drawn and paintings started.

Then it was lunch time, another large stock pot was brought out this time with a mango rice salad provided by Karyn, served with the remaining Samosa’s and spring rolls!! and if this wasnt enough we then all sang happy birthday to Anupa and had cake as her birthday would be the following day. Then it was off to White Spring, which unfortunately was not open, so it was decided by some to head into glastonbury to have a look around the shops, whilst others stayed back in the house and continued to read tarot cards for others or have a rest.

Once everyone was back and refreshed there was more small group work and a walk into the garden to each pick our own flower without anyone seeing us and then put it in a covered tray. Then it was food time again and yes served up in another large stock pot, well there were 15 or 16 at each sitting! This time courtesy of Chrissy it was a delicious quorn and pasta dish, accompanied by any leftovers, and followed by more strawberries and cream (Cagain) and other fruit bits (courtesy of Denise).

We then rolled our selves our into the garden. Denise got us all to lie down and we worked through a breathing exercise, to calm, and open ourselves up more, we then progressed on to do flower readings, most people not knowing who the flower had been picked by and hidden in the bowl earlier that afternoon. Again some excellent messages and readings, and lots of laughs with Barry’s throwing of petals as though he was playing on a craps table at vegas. And, well, as for the rude flower reading I will leave that to your imaginations!

As the sun went down, the gnats came out and the cool breeze blew we called it a night and went inside for more builders tea and because we clearly hadnt eaten enough it was time for cake, this time for Pauline’s birthday, this coming Tuesday. People then sat around chatting, or went off and did their own thing: back up in the blue room, out in the garden under the new moon, or meditating to Lynn’s CD in the meeting room. The heat this time seemed to stop the late night frivolities, but most were there to catch up on sleep and healing, so it was yet another early night.

The final day arrived, again with people rising early and congregating in the garden or the breakfast table. Breakfast was eaten, people got dressed, and sadly started to pack up ready for us to move out of the house before the next guests arrived. Thankfully the fridges were a lot emptier but there was still plenty left to take back. Once everyone was packed up, had collected their water to take home, we congregated in the meeting room, before heading up to the blue room. We each meditated and felt the love and healing in the room, which Lynn thanked everyone for once back down in the meeting room, then it was straight into another meditation. More messages shared, gently or with passion. Each person then picked an animal power card, an affirmation card and a power thought card, and split into pairs where animal power card was read by the other person. This was also followed by some ribbon readings. The morning had also seen healing being given and other techniques, stories and experiences shared. The group then sat to close down their chakras and then sad but happy, refreshed, healed and reawakened came together once more as a circle, thanked our angels, spirits and each other for the company and either as the providers of food, tea or the washer/drier uppers, then with a group hug, all made their way home bringing yet another fantastic weekend to a close.

Maybe we will see you next time at one of the retreats? look out for the next dates on the workshops and retreats page.