Home » What's Cooking in the Cauldron » What is Wassailing? 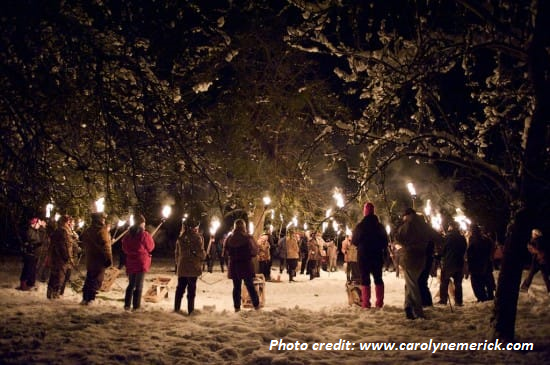 Wassailing is a celebration which takes place on the twelfth night around the 5th January.

It was an Anglo – Saxon celebration which entailed singing to apple and pear trees to encourage a good harvest. The celebration was mainly held in farming communities but then began to filter out into the cities. Here merrymakers would go from house to house singing songs.

The blessing of the trees would involve drinking as well as singing. They would have a King and Queen to lead a procession through the village going to each orchard.

The noise created would awaken the trees and banish evil spirits.

They would soak pieces of bread in ale or cider and skewer onto the braches of the biggest tree as an offering.

Quite often the communities were cider producers. The festivities would begin with a toast of waes hael meaning ‘be in good health’ the group would then reply with ‘drink hael’ or ‘drink well’.

Often the drink would be passed around in a big bowl from person to person as they greeted each other.

Celebrations are still held today in rural communities and you can also go to the 12th night celebrations in London.